skip to main | skip to sidebar

In colonial Singapore, official street names were assigned at municipal meetings on the approval of Municipal Commissioners. Names were normally proposed by municipal assessors although suggestions sometimes originated with the commissioners or requests of property owners.

The estate has a good mix of interesting British road names (towards the south and west of the estate) and Malay road names (towards the Serangoon side on the north and east). Many of the British road names were named after scenic places in Britain, perhaps reflecting a sense of nostalgia for the beauty of their home country which colonial masters wanted to project to Braddell Heights. The hilliness and slopes of Braddell Heights were also portrayed in the place names chosen (e.g. Clifton, Matlock, Chiltern & Muswell are hilly areas or villages) and in the hill and valley descriptions e.g. Vale, Rise and Hill. Many of the Malay names reflected a theme of happiness and enjoyment which the locals wanted for this pleasant area.

Braddell Road
Constructed in the pre-war era, Braddell Road was named after the Braddell family which included several eminent members. Thomas Braddell (1823-1891) began his career as a sugar planter and then joined the East Indies Company in 1849. He was called to the Bar in 1859 and was Crown Counsel and Attorney General of the Straits Settlements (1867-1882). His son, Sir Thomas de Multon Lee Braddell was Chief Judicial Commissioner, Federated Malay States (1913-1917) and Colonial Secretary. The grandson of the first Braddell, Dato Roland St John Braddell was born in Singapore 1880 and was Municipal Commissioner (1914-1929) and author of several legal and historical books, including the Law of the Straits Settlements, Legal Status of the Malay States and One Hundred Years of Singapore. He was advisor to UMNO and was involved in the negotiations which led to the formation of the Federation of Malaya in 1948.

Sommerville Road/Walk: named after MR Sommerville and his brother. One was the Director of Straits Steamship Company and the other the director of Blue Funnel Line (Ocean Steam Ship Company).

MacKerrow Road: named after William McKerrow, assistant to John Little & Co and associated with Patterson Simons & Co. He resigned from the Municipal Commission over the erection of a fire station in what is now Raffles Place.

Wolskel Road: named in 1934 after Wolskel, managing director of a local company.

Vaughan Road: named in 1934 after Jonas Daniel Vaughan, Assistant Magistrate and Resident Councillor in Singapore, 1861-69. He was a leading member of the Bar until his death in 1890 which occurred when he disappeared from a ship returning from Perak.. He had defended ex-sultan Abdullah for the murder of Mr JWW Birch, the first British Resident of Perak. He was the author of the book, Manners and Customs of the Chinese in the Straits Settlements.

Muswell Hill: named in 1950 after the area of north central London. The name Muswell is believed to come from a natural spring or well (the "Mossy Well"), said to have miraculous properties. The traditional story tells that a Scottish king was cured of disease after drinking the water of the spring/well. The area became a place of pilgrimage for healing during medieval times. It was not until the 19th century that Muswell Hill began to be developed more densely from a collection of country houses to the contemporary London suburb.

Dunsfold Drive: named after a village in Surrey in the south of England. The village has many ancient houses of architectural interest.

Lynwood Grove: named in 1950 and is a pleasant sounding name in keeping with the other street names in this area off Braddell road. Lynnwood or Lynwood, a common place name in USA and UK now, was also a place name in beautiful Cumbria, The Lake District, England.

Cotswold Close: this unique rectangular ring road with two exits was named in 1950 after a English popular holiday area noted for the honey coloured stone walls of its buildings. The Cotswolds is a range of hills in west-central England, sometimes called the "Heart of England", an area 25 miles (40 km) across and 90 miles (145 km) long. The area has been designated as the Cotswold Area of Outstanding Natural Beauty. The area is characterised by attractive small towns and villages built of the underlying Cotswold stone (a yellow oolitic limestone).

Clifton Vale: named in 1951 after a town on a steep hill in south west England.

Chiltern Drive: named after a range of hills to the north west of London. The Chilterns are an unspoilt area of rolling chalk hills, magnificent beechwoods, quiet valleys and charming brick and flint villages with a wonderful mosaic of woods, fields, hedges, sunken lanes and clear streams.

Melrose Drive: named in 1951 after a town and ancient abbey (among the most beautiful of religious houses in the UK) the Scottish Borders.

Matlock Rise: named in 1951 after an English town, a spa resort in the hilly area of Derbyshire, UK.

Sundridge Park Road: named in 1951 after a village in Kent, one of the most beautiful counties in south of England. .

Bukit Arang Road: meaning charcoal hill. Charcoal was the cooking and heating fuel in the days before electricity. Note Bukit Arang Road is next the Wolskel Road where the tycoon Lim Loh’s family biscuit and brick factories were located.

Lorong Biawak: named after the monitor lizard/iguana (not uncommonly seen in the gardens of Braddell Heights)

Lorong Selangat: named after a common marine fish (Chacunda gizzard shad) which is silvery on sides with a large black spot behind gill opening. The fish is highly resilient. Can grow to 22cm and is important for commercial fisheries in South east Asia, Indian and Pacific Oceans. It is marketed fresh, frozen, dried, dried-salted, boiled or made into fish balls.

The other boundary roads
Lorong Chuan ( 罗 弄 泉 ): meaning fountain in Chinese/Hokkien. This is an auspicious name referring to wealth and prosperity.

Serangoon Avenue 3 / Serangoon Road: the origin of the name is uncertain. The name was likely to be derived from a small marsh bird, the burong ranggong, which was common in the swamps of the Serangoon River (formerly the Rangon River). For the Chinese, the road is called hougang lu or ow kang meaning back of the Port road, signifying the back of the Port in Kallang.


Towkay Lim Loh, an early resident in Braddell Heights area
One of Singapore's most successful towkays wealthy industrialist Lim Chee Gee, better known as Lim Loh, made his fortune in pre-war Singapore in rubber estates, brick and biscuit factories as well as trading and construction businesses.

Lim Loh was born in Fujian Province, China in 1851 and came to Singapore. He owned a rubber plantation estate bounded by Braddell, Wolskel and Upper Serangoon roads, where he built three bungalows for his family to live in. He also had two brick factories and a biscuit factory in Wolskel Road. The tycoon had six wives, 19 sons and 9 daughters. Lim Loh built several of Singapore’s building landmarks. These include Victoria Memorial Hall, the old Parliament House and part of the Goodwood Park Hotel. Lim Loh died in 1929 in Singapore. War hero Lim Bo Seng was his son.

Lim Bo Seng (simplified Chinese: 林谋 盛; April 27, 1909 - June 29, 1944) was a World War II anti-Japanese Resistance fighter who was based in Singapore and Malaya. As he was very active in many anti-Japanese campaigns, his name appeared on the Japanese's enemies list. He recruited and trained hundreds of secret agents and he set up the Sino-British guerrilla espionage group Force 136 in mid-1942. He was eventually captured, jailed and tortured by the Japanese. Lim Bo Seng is truly a war hero as he fought and sacrificed his life for his country. His steadfast refusal, despite painful torture, to reveal information which would endanger his comrades and the cause he was fighting for, made him even more admirable.

According to Mr Lim Teck Kiam (a descendant of Towkay Lim Loh) of Sommerville Road, Lim Loh was a very rich man and owned over 100 hectares of land estate at Braddell Heights (known to Chinese community as Hougang 4 and half milestone area). His land area stretched from Serangoon Road to Lorong Chuan and Braddell Road. The other land owner within this area was an Arab and owned a smaller portion. The whole area was previously mainly a rubber plantation. During the war years, the plantation was cut down by a contingent of Indian soldiers, as burning fuel for cooking food. Lim Bo Seng’s two factories manufacturing biscuit and manufacturing red bricks were located in Braddell Heights estate next to Lim Teck Kiam’s father’s cupboard and cabinet making factory.

References:
1. Raja-Singam, SD. (1939) Malayan Street Names: What They Mean and Whom They Commemorate, Ipoh: Mercantile Press.

Also glad to know that the history/facts of braddell heights
http://www.braddellestate.com/braddellfacts.html
is adapted from the article from this website at October 18, 2008
- Braddell Heights Private Estate by Kelvin Tan 5 Oct 2008
Posted by Kelvin Tan at 6:25 AM 1 comment: 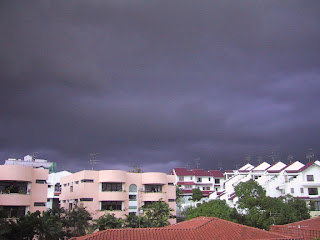 Braddell Heights Private Estate with Condo (Now redevelops to Arcacia) and Looming Rain Clouds in the Background
Posted by Kelvin Tan at 8:32 AM No comments: 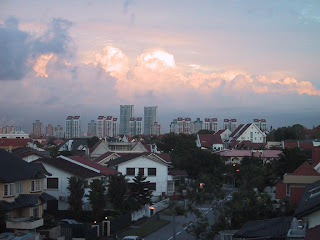 Braddell Heights Private Estate with Bishan Flats and Glorious Pink Clouds in the Background
Posted by Kelvin Tan at 7:54 AM No comments: 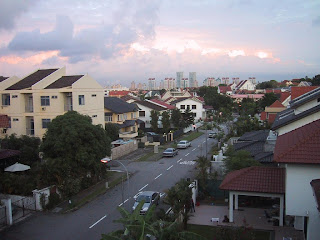 Note the yellow big building on the left was Tan Mansion (if I remember correctly) which will be D'Almira 25 Units Condomunium. Website is at (as of April 2009) http://www.dalmirasommerville.com/
Posted by Kelvin Tan at 9:20 AM No comments: 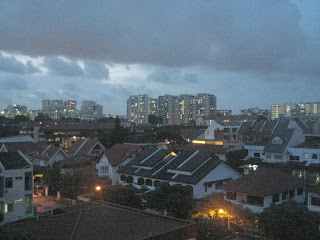 Night scene of Braddell Heights at Sommerville Road. In the background are the housing blocks and condos of Serangoon

Kelvin Tan copyrights
Posted by Kelvin Tan at 5:04 AM 1 comment:

Noted people are interested in Braddell Heights, one of Singapore older private estate with a rich history.

My whole long post on the history and street names of Braddell Heights Private Estate (Kelvin Tan 5 Oct 2008) was repeated in another blog on a Sommerville Regency (Freehold Cluster House in Singapore at Lorong Selangat) on January 15, 2009
see http://pchua-sr.blogspot.com/

Braddell Heights Estate with a predominance of Chinese residents has both English (British) and Malay street names and flavour. So it fits new housing projects to adopt either European or Malay sounding names. However it seems that European names rather than Chinese or Malay are more in vogue. The expatriate Ang Mohs are also increasingly seen in and around the Estate.